Einstein’s theory of general relativity and quantum theory differ significantly not only in their mathematical formulations but also in their foundational concepts. Even with either theory being indisputably tested to high precision independently, observed gravitational effects in current quantum experiments are explainable with non-relativistic, Newtonian limit of gravity and the performed tests of general relativity are all consistent with classical mechanics. There is therefore a fundamental interest in probing the interplay between gravity and quantum mechanics where both theories are required to explain the phenomena.

In a serious of works we predicted novel quantum effects arising from the relativistic time dilation in interference experiments with quantum “clocks”. A quantum “clock” is any quantum system with dynamical internal degrees of freedom, from which one operationally can read out time. According to quantum theory any system can propagate along multiple paths in superposition, while general relativity, due to time dilation, predicts that the time elapsed for a system depends on its path. Therefore, in the regime where both theories apply, time dilation will generally entangle the internal states of a “clock” to the path. In interference experiments this will cause loss and revivals of the interference fringes in experiments with atoms or molecules, with their electronic or vibrational energy levels as “clocks” [1], and with photons due to the Shapiro effect [2]. Moreover, the interferometric visibility is affected stronger for larger systems. For macroscopic systems the loss of visibility can become very rapid and, for all practical purposes, irreversible. Hence, time dilation can result in decoherence [3]. The effects are relevant already at low energies and in Earth gravitational field.

In an independent research direction, we studied possibilities of probing phenomenological models of quantum gravity in table-top experiments, which conjecture a modification of canonical commutation relations. We were the first group to propose a scheme to experimentally test this conjecture by probing the canonical commutation relation of the center-of-mass mode of a nano-mechanical oscillator [4]. 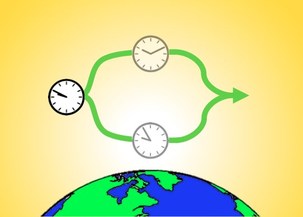