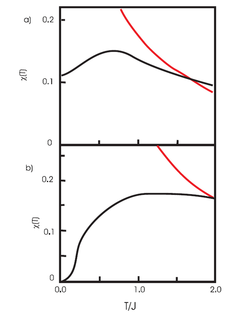 It is commonly believed that for the understanding of the behaviour of large, macroscopic, objects at moderately high temperatures there is no need to invoke any genuine quantum entanglement. This is because decoherence effects arising from many particles interaction with the environment would destroy all quantum correlations.

In a series of papers [1-4] we have shown that this belief is fundamentally mistaken and that entanglement is crucial to correctly describe macroscopic properties of solids. Moreover, we demonstrated that macroscopic thermodynamical properties – such as internal energy, heat capacity or magnetic susceptibility – can reveal the existence of entanglement (i.e. are so called “entanglement witnesses) within solids in the thermodynamical limit even at moderately high temperatures. We found the critical values of physical parameters (e.g. the high-temperature limit and the maximal strength of magnetic field) below which entanglement exists in solids.