NEWS: Quantum causal relations: A causes B causes A 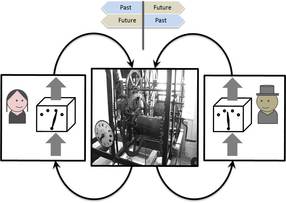 A task in which it is impossible to tell who influences whom.
One of the most deeply rooted concepts in science and in our everyday life is causality; the idea that events in the present are caused by events in the past and, in turn, act as causes for what happens in the future. If an event A is a cause of an effect B, then B cannot be a cause of A. Now theoretical physicists from the University of Vienna and the Université Libre de Bruxelles have shown that in quantum mechanics it is possible to conceive situations in which a single event can be both, a cause and an effect of another one. The findings will be published this week in "Nature Communications".

Although it is still not known if such situations can be actually found in nature, the sheer possibility that they could exist may have far-reaching implications for the foundations of quantum mechanics, quantum gravity and quantum computing.


Causal relations: who influences whom

In everyday life and in classical physics, events are ordered in time: a cause can only influence an effect in its future not in its past. As a simple example, imagine a person, Alice, walking into a room and finding there a piece of paper. After reading what is written on the paper Alice erases the message and leaves her own message on the piece of paper. Another person, Bob, walks into the same room at some other time and does the same: he reads, erases and re-writes some message on the paper. If Bob enters the room after Alice, he will be able to read what she wrote; however Alice will not have a chance to know Bob’s message. In this case, Alice’s writing is the "cause" and what Bob reads the "effect". Each time the two repeat the procedure, only one will be able to read what the other wrote. Even if they don’t have watches and don’t know who enters the room first, they can deduce it by what they write and read on the paper. For example, Alice might write "Alice was here today", such that if Bob reads the message, he will know that he came to the room after her.

As long as only the laws of classical physics are allowed, the order of events is fixed: either Bob or Alice is first to enter the room and leave a message for the other person. When quantum mechanics enters into play, however, the picture may change drastically. According to quantum mechanics, objects can lose their well-defined classical properties, such as e.g. a particle that can be at two different locations at the same time. In quantum physics this is called a "superposition". Now an international team of physicists led by Caslav Brukner from the University of Vienna have shown that even the causal order of events could be in such a superposition. If - in our example - Alice and Bob have a quantum system instead of an ordinary piece of paper to write their messages on, they can end up in a situation where each of them can read a part of the message written by the other. Effectively, one has a superposition of two situations: "Alice enters the room first and leaves a message before Bob" and "Bob enters the room first and leaves a message before Alice".

"Such a superposition, however, has not been considered in the standard formulation of quantum mechanics since the theory always assumes a definite causal order between events", says Ognyan Oreshkov from the Université Libre de Bruxelles (formerly University of Vienna). "But if we believe that quantum mechanics governs all phenomena, it is natural to expect that the order of events could also be indefinite, similarly to the location of a particle or its velocity", adds Fabio Costa from the University of Vienna.

The work provides an important step towards understanding that definite causal order might not be a mandatory property of nature. "The real challenge is finding out where in nature we should look for superpositions of causal orders", explains Caslav Brukner from the Quantum Optics, Quantum Nanophysics, Quantum Information group of the University of Vienna.