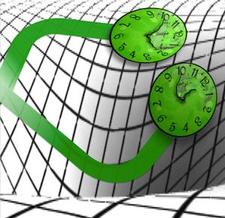 A single clock being in a superposition.
The unification of quantum mechanics and Einstein's general relativity is one of the most exciting and still open questions in modern physics. General relativity, the joint theory of gravity, space and time gives predictions that become clearly evident on a cosmic scale of stars and galaxies. Quantum effects, on the other hand, are fragile and are typically observed on small scales, e.g. when considering single particles and atoms. That is why it is very hard to test the interplay between quantum mechanics and general relativity. Now theoretical physicists led by Prof. Časlav Brukner at the University of Vienna propose a novel experiment which can probe the overlap of the two theories. The focus of the work is to measure the general relativistic notion of time on a quantum scale. The findings will be published this week in “Nature Communications”.

One of the counterintuitive predictions of Einstein's general relativity is that gravity distorts the flow of time. The theory predicts that clocks tick slower near a massive body and tick faster the further they are away from the mass. This effect results in a so-called "twin paradox": if one twin moves out to live at a higher altitude, he will age faster than the other twin who remains on the ground. This effect has been precisely verified in classical experiments, but not in conjunction with quantum effects, which is the aim of the newly proposed experiment.

The Viennese group of researchers wants to exploit the extraordinary possibility that a single quantum particle can lose the classical property of having a well-defined position, or as phrased in quantum mechanical terms: it can be in a “superposition”. This allows for wave-like effects, called interference, with a single particle. However, if the position of the particle is measured, or even if it can in principle be known, this effect is lost. In other words, it is not possible to observe interference and simultaneously know the position of the particle. Such a connection between information and interference is an example of quantum complementarity - a principle proposed by Niels Bohr. The experimental proposal now published in “Nature Communications” combines this principle with the “twin paradox” of general relativity.

Einstein's “twin paradox” for a quantum “only child”

The team at the University of Vienna considers a single clock (any particle with evolving internal degrees of freedom such as spin) which is brought in a superposition of two locations – one closer and one further away from the surface of the Earth. According to general relativity, the clock ticks at different rates in the two locations, in the same way as the two twins would age differently. But since the time measured by the clock reveals the information on where the clock was located, the interference and the wave-nature of the clock is lost. “It is the twin paradox for a quantum ‘only child’, and it requires general relativity as well as quantum mechanics. Such an interplay between the two theories has never been probed in experiments yet” – says Magdalena Zych, the lead author of the paper and member of the Vienna Doctoral Program CoQuS.  It is therefore the first proposal for an experiment that allows testing the genuine general relativistic notion of time in conjunction with quantum complementarity.

This work was supported by the Austrian Science Fund (FWF) projects: W1210, P19570-N16 and SFB-FOQUS, the Foundational Questions Institute (FQXi) and the European Commission Project Q-ESSENCE (No. 248095).