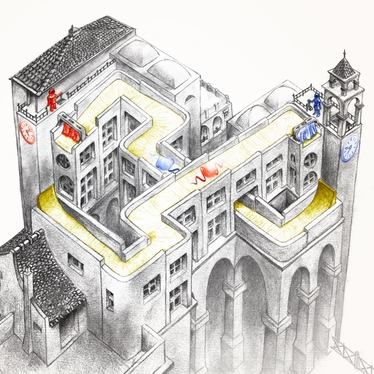 One of the most fundamental concepts in science is that of causality; the idea that events in the present are caused by events in the past and, in turns, act as causes for events in the future. However, the interplay between general relativity and quantum theory might require considering more general situations in which the causal order between events becomes indefinite. There might, for instance, exist an indefinite causal structure that corresponds to a quantum superposition of “A causing B” and “B causing A”.

Our group developed a framework that assumes that operations in local laboratories are described by quantum mechanics, but where no reference is made to any global causal relations between these operations [1]. The central notion of the formalism is that of a “process” (or a “process matrix”), which is a generalization of the notion of a “physical state” (degrees of freedom at a space-like hypersurface) and of a “channel” (degrees of freedom at a time-like hypersurface). The new notion of the process is versatile enough to encompass both situations, and is reduced to one or the other when the causal order is fixed. Remarkably, the framework also allows for processes which are neither causally ordered nor in a probabilistic mixture of causally ordered processes, i.e. they cannot be understood as quantum channels or states. A process is called causally separable if it can be decomposed as a convex combination of causally ordered processes, otherwise it is causally nonseparable. Recently, we have developed a method for certifying causal separability, which is based on “causal witnesses” [2, see also our video].

Causally nonseparable processes can rise to correlations that can violate “causal inequalities” which are satisfied if the events are ordered according to a fixed causal order [1,3]. This is a direct analogy to the famous violation of Bell’s inequalities by quantum correlations, which are satisfied if the correlations fulfill the condition of local causality. While we still lack any understanding whether there are correlations in nature which could violate causal inequities, we do know that physically implementable causally nonseparable processes exist. One particular case is the “quantum switch”, an axillary quantum system which can coherently control the order in which operations are applied and hence realize “superpositions of causal circuits”. We have proved that such “superpositions of causal circuits” offer linear advantages in regard to query complexity [4] and exponential advantage in communication complexity [5] over fixed or classically controlled quantum circuits (See also “Quantum Communication Complexity”).

You can find a review on quantum causality here [6].